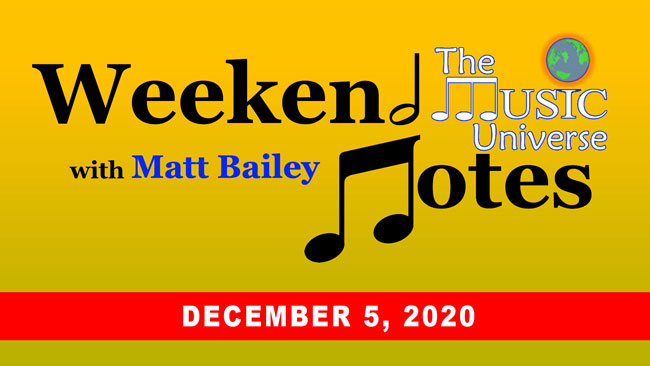 TMU is back from their trip to Nashville.

Our top story this week, The Recording Academy has revealed nominees for the 63rd Annual GRAMMY Awards. Leading the pack this year are recordings representing a wide-range of musical genres, including pop, classical, jazz, rap, R&B, and rock.

As the only peer-selected music accolade, the GRAMMY Awards are voted on by the Recording Academy’s voting membership body of music makers, who represent all genres and creative disciplines, including recording artists, songwriters, producers, mixers, and engineers.

But, that peer-nominated process has landed in hot water with one glaring omission: The Weeknd’s critically acclaimed album After Hours. Despite sweeping at other awards shows, neither the album or the artist received any Grammy nods. In response, The Weeknd accused the Grammys of being quote — “corrupt” and called on the Recording Academy to offer transparency. TMU founder and Editor-in-Chief Buddy Iahn weighs in.

Goo Goo Dolls has announced details for It’s Christmas All Over, the first-ever augmented-reality movie musical, created and presented by the livestreaming platform FanTracks. It’s Christmas All Over will feature Goo Goo Dolls performing music from their new holiday album of the same name, but goes beyond the realm of a live concert to transport viewers through an unparalleled music journey, all taking place within a surreal virtual world. Directed and produced by FanTracks President Barry Summers, the full hour-long program will first air as an exclusive sneak-peak for FanTracks subscribers only on December 11th at 7 pm ET. The official global release, which will be free to all viewers, will happen at 7 pm ET on December 12th. There will also be VIP private video meet & greets and a Q&A with the band. The program will remain available on-demand for free for 48 hours after the conclusion of the premiere.

Melanie Martinez has announced a global streaming concert event that marks the end of an era for the pop star. Can’t Wait Till I’m Out of K-12 celebrates her internationally acclaimed K-12 album and accompanying full-length film with a spectacular concert production, featuring a full band, dancers, and all of the one-of-a-kind theatricality fans have come to expect from Melanie. The newly conceived concert experience marks the last opportunity for fans everywhere to experience an extraordinary K-12 concert production, giving songs from the K-12 Tour a new spin, in addition to performing tracks from her recent After School EP.

Ann Wilson has confirmed a Heart biopic is currently being produced at Amazon. The singer shared the news with host Lyndsey Parker on SiriusXM’s Volume West. She confirms Carrie Browestein, of the punk band Sleater-Kinney and the co-star of IFC’s Portlandia, is currently writing the script that she’ll also direct.

Grammy-winning country music icon, Wynonna Judd, has partnered with Nashville-based CeleBriDy Brands to develop the exciting new Harmony by Wynonna Judd brand of CBD products. Custom formulated to the specifications of the country music queen herself, Harmony by Wynonna Judd is a luxurious new line of herbal-infused hemp-derived oils and balms designed to help bring harmony to your everyday life. The line is made using organic extracts from hemp grown and responsibly sourced in the USA. Harmony is manufactured in Nashville using all-natural ingredients infused with other extracts to promote relaxation.

After you have that CBD, you’ll probably want a snack. Lady Gaga is partnering with Nabisco for her own special Chromatica-inspired Oreo cookie. The limited edition sandwich cookies are inspired by the GRAMMY-winner’s sixth studio album and feature a pink cookie with green filling with Chromatica-inspired etchings designed into the cookie.

And finally, Taylor Swift has given her Swifties a taste of new music. Or is it old music?

Swift shared a-true-to-original snippet of the re-recording of her single 2008 single “Love Story” which appears in a new match.com ad that was written by friend and actor/director Ryan Reynolds. The ad pairs the devil with his perfect match. See for yourself in this week’s episode!

Those are your Weekend Notes for December 5th, 2020.

Buddy Iahn founded The Music Universe when he decided to juxtapose his love of web design and music. As a lifelong drummer, he decided to take a hiatus from playing music to report it. The website began as a fun project in 2013 to one of the top independent news sites.